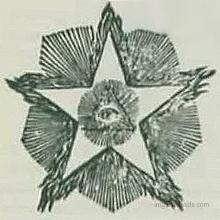 “And the Sphere of it’s operation is that of Kokab, the stellar light, bestowing elegance, swiftness, and scientific knowledge and art, and constancy of speech, and ruleth the sphere of the action of the planet Mercury.”

in Hebrew Kokab means Star and the  planet Mercury. But can also refer to the planet Venus by some. But I think this is a reflection of it’s Venusian energies from Netzach, Hod’s Twin and counter Sephirot.

The Kokab is Feminine,  but used as a name for Girls and Boys. Meaning Bold and Attractive.

The star or the Kokab here can also symbolize the individual mind. Hod is the sphere of individual intelligence as opposed to Netzach which deals more with the “group mind”. Makes me Think of Crowleys observance that “Every man and every woman is a star”